From riding roller coasters, driving go karts, besting all challengers in Call of Duty under the tag PinkPrincess8, to articulating what she thinks, feels, and learns, Azalea Hood is forging a childhood without boundaries with the support of CU Medicine's Assistive Technology Clinic: Center for Inclusive Design and Engineering. 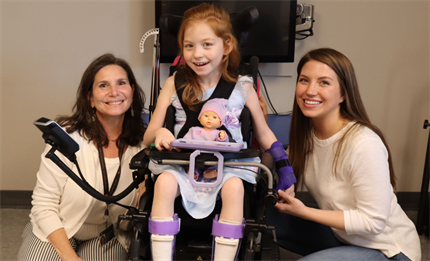 Exclaiming in playful, rapid succession, the audio of Azalea Hood’s augmentative alternative communication (AAC) device can be heard throughout the Hood home. Whether this is the beginning of a declaration of Azalea’s desire to start a new game of Call of Duty, or a case of sibling banter where Azalea has found a way to push her older sister’s buttons both literally and figuratively, she is empowered to express herself authentically as the bright, independent individual she is. Azalea is able to communicate and participate in life’s activities with the help of assistive technology and guidance from CU Medicine’s Assistive Technology Clinic: Center for Inclusive Design and Engineering.

Azalea was born with schizencephaly, causing spastic quadriplegic cerebral palsy. “It causes a lot of involuntary muscle patterns that are pretty painful,” Azalea’s mom, Amber Hood, explains. “But her disability is really only physical. Mentally, she's totally bright. She goes on roller coasters, Ferris wheels, and go karts with her Dad, and is always doing what every other kid is wanting to do. We just have to have different support and modifications.”

With Azalea’s diagnosis affecting her ability to speak and use her arms and legs, the Hood family first sought to acquire a power wheelchair. They have now been clients at the Center for Inclusive Design and Engineering (CIDE) for just over a year and have found holistic support for Azalea’s assistive technology needs. 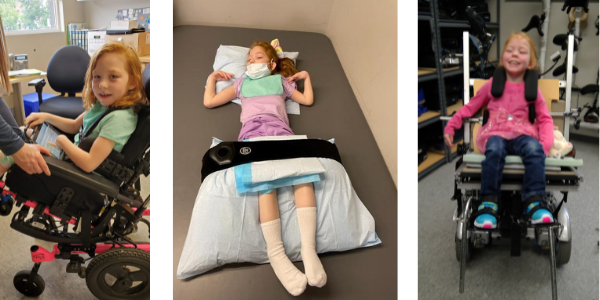 Azalea and her family work with three clinicians at CIDE that address her power wheelchair use, postural and night time positioning needs, and AAC device use respectively. “One of the things that's unique about CIDE, that differentiates us from other places where you would go for just wheelchair seating or just AAC communication, is that we've got clinicians who cover the full spectrum that's out there across all needs, and then we work together. We also are able to access a vast library of assistive technologies so that we can try out multiple approaches and see what works best for each client,” occupational therapist Becky Breaux explains.

Breaux and her fellow clinicians take a multi-disciplinary, client-centered approach when performing extensive evaluations to determine optimal fit and functionality of assistive technology best suited to each client.

With the support of CIDE and Breaux, Azalea’s power wheelchair is suited not only for her postural and motor skill based needs, but also her hobbies and lifestyle. Breaux has worked with Azalea in integrating her Xbox Adaptive Game Board with switches that mount to her wheelchair.

Azalea loves to play video games with her friends and family. Call of Duty is a massive multiplayer online game (MMOG) accessed via Xbox and is one of Azalea’s favorites. “She'll beat the guys and when they get beat, they get beat by PinkPrincess8,” says Amber, referring to Azalea’s gamer tag.

CIDE supports the ongoing process of acquiring and mastering the life-changing implementation of assistive technology. Azalea recently underwent selective dorsal rhizotomy surgery that has improved mobility in her arms. This progression alleviated some pain and also resulted in a need for further modifications to Azalea’s assistive technology devices.

Azalea previously used an eye gaze AAC device. With her motor skill advancement, she is now able to utilize an AAC tablet device. “We really look at it as a means for her to formulate novel sentences. We don't want to limit her to buttons that we've pre stored to say ‘leave me alone’ or ‘hi, how are you?’ She might want to say something different, like ‘go away’ instead or ‘don't touch my talker,’’' explains speech pathologist Aleaza Goldberg.

Goldberg continues, “To be able to communicate autonomously in the words you want to say at the time you want to say them is powerful. She is really going to succeed, so it was important that we got her a device that would expand as her language expands.” With the transition from an eye gaze AAC device to a tablet, Azalea is empowered to express her thoughts and feelings authentically while also being further integrated into her physical environments and interactions – all without the screen of an eye gaze AAC blocking her view of her surroundings and her peers’ view of her.

Azalea will also continue to work with Breaux as they explore the implementation of a joystick to control the power wheelchair rather than the switches currently in place. “She loves being independent. She loves going on her own. She doesn't want to depend on someone else to push her,” Breaux observes. “She wants to explore, and there's quite a bit of research that shows that when children are independently mobile, and it's got to be of their own volition, that it's linked to all kinds of development. Her ability to explore her environment, go where she wants to go, and do the things she wants or needs to do on her own has ramifications across so many different areas. It's development, but it’s also self-esteem and self-identity.”

Amber Hood reflects on how assistive technology has empowered her daughter, saying, “She lights up. There are a lot of times she gets down when she sees she is being left out, but with this device and chair, it's a lot more of realizing ‘I don't have to have that down feeling. I can do this.’”

CIDE and its clinicians not only provide services and education to their clients regarding assistive technology, but also advocate on behalf of their clients’ needs and access to assistive technology. Clinicians work tirelessly to write appeals to overcome barriers to access that underserved clients often face. In Azalea’s case, CIDE was instrumental in advocating for the need of a new AAC device as Azalea’s needs and abilities evolved.

CIDE “envisions a world where everyone is engaged in life without boundaries.” Breaux explains how Azalea exemplifies this objective, saying, “She's a wonderful example of someone who uses assistive technology in nearly every aspect of her life. It is empowering her to live that life without boundaries to reach her goals and to do the things that are important and meaningful to her, boosting her self-esteem and improving her quality of life.”

“Assistive technology is life changing for Azalea and her family. She really values it and it's really important to her. It aligns very well with her very strong will and her desire to do everything everybody else does because that's her thing. She wants to do everything everyone else does. She doesn't want to be any different. Assistive technology allows her to do that,” says Breaux.

Click here to learn about the Center for Inclusive Design and Engineering’s research, product testing, outreach, and awareness efforts. For more information about the clinic and to book an appointment, click here.